Ezekiel Elliot and Dallas Cowboys have finally settled on a new agreement for a six-year extension deal at $90 million. It sounds like a hoax but official sources have confirmed about the deal between Cowboys and Elliot. NFL 2019 season Week 1 is almost here and the Cowboys wanted Zeke to sign a new deal before their opening match against the New York Giants.

It is also reported that Elliot was flying back and forth between Dallas and Cabo as the deal was at the final stages of completion. The Cowboys have paid so much money to Elliot and it is honestly the riskiest Super Bowl gamble.

The #Cowboys & RB Ezekiel Elliott agree on a 6-year, $90M extension that makes him the highest-paid RB in the NFL, sources tell me and @SlaterNFL. Roughly half guaranteed. In all, it's $103M over 8 years—the 1st Cowboy to eclipse $100M in total value, the richest RB contract.

Cowboys feeding RB Ezekiel Elliott a six-year contract extension that ties him to Dallas for the next eight seasons, through the 2026 season, per source.

While the average salary of both Elliot and Gurley comes out to be $15 million, the former has more guaranteed money. The Rams have only guaranteed $40 million to Gurley while Elliot has $10 million more in safety bonds. After the whole Jerry Jones issue with Zeke, it was evident that the Cowboys will offer him a max deal.

Does Cowboys really have Shot at Super Bowl?

It may sound that the Cowboys have taken a huge risk but they have done it after so many calculations and team predictions. Elliot is the best in Dallas and whole of NFL where he rushed for 1,434 yards on 4.7 yards per carry in the last season. The Cowboys are the NFC East champions and can even make it to the playoffs without Elliot.

Super Bowl title is their main target for which Zeke is absolutely required in the team. He adds so much to the Cowboys offense with and made 77 receptions for 567 yards and three scores in the last season. The Cowboys have gambled everything on Ezekiel Elliot in a hope to win the Super Bowl 2020 trophy. 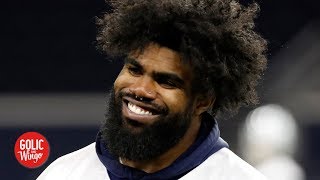