NFL 2019 regular season is almost started and there are still no reports from Ezekiel Elliot coming back to the Dallas Cowboys. When Elliot was offered the second-highest running back deal, everyone thought the dispute is over. But to the disappointment of Cowboys, Zeke refused the deal and asked for more money.

Things were not right between Cowboys owner Jerry Jones and Elliot from the beginning and now it has got worse. Jones first insulted Elliot, then offered him a deal to compensate and after he declined that, he lost it. As per the reports, it is said that Elliot will miss the regular season games. Cowboys’ running back Elliot might have been fired from the team indirectly by Jerry Jones.

Ezekiel Elliot was sitting on a holdout and missed the entire training camp and preseason games. Cowboys tried their best and even offered him a deal between $13 – $14 million per year. It would have made Zeke as the second-highest earner in terms of NFL quarterback.

But his agent told him to not accept the contract and ask for more. The plan was to ask more money in a way of compensation for the insult done by Jerry Jones. Cowboys needed Elliot badly and might have even offered him a bigger deal.

It seems Jerry Jones has now made it personal and there is no way he will take it lightly. Gurley at $14.375 million per year and Le’Veon Bell at $13.125 million per year are the highest-paid running back in NFL right now. The Cowboys were ready to pay in between but higher than that is not in their plans.

Jerry Jones on Ezekiel Elliott: "I'm operating as though right now he's going to miss regular season games. My entire expectation for what we're putting together as a team right now would anticipate with him holding out … that he's going to miss games. I just accept that."

Jerry Jones on @1053thefan when asked about expectations for this season not changing with Ezekiel Elliott holding out: “Most of these teams win Super Bowls without rushing champions. Secondly, we’ve had (Zeke) going on three or four years and we haven’t won it yet.” pic.twitter.com/MmQxsKUyuQ

Jerry Jones has cleared that he doesn’t make negotiations with the players and it’s the job of the coach and other officials. But indirectly everyone knows that Jones is the reason why Elliot will miss the 2019 NFL season. It is all about the big man’s ego and he won’t let things to so easily. 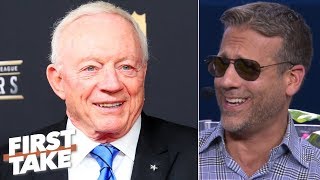