Dallas Cowboys extended the contract of Ezekiel Elliott and now it’s the turn for Dak Prescott. The trio of Elliott, Prescott and Amari Cooper is currently one of the best in NFL and the Cowboys can’t risk letting even one of them go. While Elliott was sitting out on a holdout, Prescott stayed with the team and attended all the training camp sessions.

It is time the Dallas club Owner Jerry Jones rewards Dak for his loyalty and offers him a blockbuster deal. Given how the quarterbacks are the main pillars of any NFL team, they are always the highest-earning team members. It is why the Cowboys can offer Prescott a deal bigger than Elliott before the Week 1 Sunday games.

NFL teams have been too good with the quarterbacks this year and some of the biggest deals were made recently. Jared Goff and Carson Wentz were paid around $130 million in contract extension deal with near to $100 million in guarantees. While everyone assumed Prescott may not get a similar deal, it can turn out to be wrong.

The latest reports claim that Jerry Jones is planning to offer Dak Prescott the biggest QB contact in NFL. Prescott is about to earn $40 million per year which makes a total of $160 million with around $120 million in the guarantee. In comparison, Zeke stands nowhere close as his total deal worth is $90 million. There shouldn’t be a comparison between them to be honest, as running backs are always paid lower than the quarterbacks.

Read more:  Why did Meghan Markle divorce her first husband?

Prescott to get New Deal before Sunday

Dallas Cowboys will face the New York Giants team on the Week 1 Sunday game and it is going to be a tough fight. Even though the Cowboys are the stronger team, there are high chances of an upset from the New York team. Ezekiel Elliot was signed before the game and similar thing will happen for Dak Prescott.

Stephen Jones says they are still holding out hope to get a deal done with Dak Prescott before the game on Sunday.

The Cowboys can’t risk missing their main stars and are working fast to make the deal happen. Amari Cooper will be the next player in Cowboys to get a big extension. Dallas team have high hopes in the 2019 NFL season and are planning for the Super Bowl title. 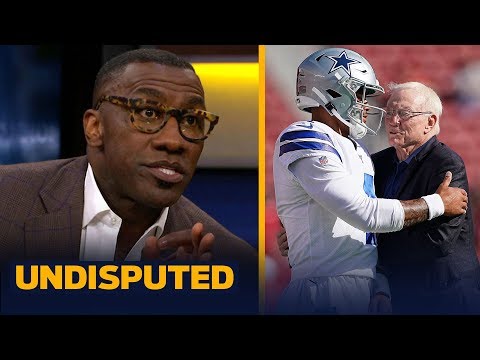