All eyes were on CM Punk as AEW All Out went on-air. Fans were expecting Punk to pop out any moment – and they hoped it happens till the moment the show went off the air! This did not happen and left a lot of fans disappointed. However, Punk’s debut might have been put on hold as AEW has bigger plans for him!

Reportedly, Punk’s debut will take place at the first episode of AEW’s Wednesday Night Dynamite, which starts off in the first week of October 2019.

Punk had expressly denied the fact that he is NOT going to be present in the arena for All Out, which was happening in his hometown of Chicago! His absence caused quite a stir but his return will cause a storm. CM Punk’s debut is likely being held off because AEW would like him to make an impact similar to what Lex Luger did for the first episode of Nitro.

The crowning of Chris Jericho as the first AEW World Champion was the moment of the night for this PPV, and Punk’s return will be the highlight of the night once the show goes on TNT every Wednesday night starting October 2nd.

A little disappointed that cm punk didn't show up at #AllOut but hopefully for the TV debut.. #AEW

Will Punk Join WWE Instead?

What makes this Punk-AEW relationship complicated is that Punk’s agent has reportedly been in talks with Fox over a FS1 deal where Punk will host a weekly TV Show discussing the events of SmackDown Live. Stay tuned with us for more details on this! 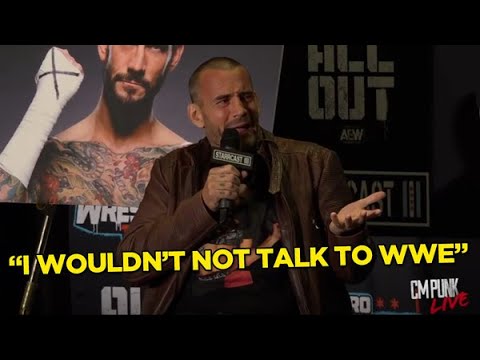