The UFC 244 fight between Jorge Masvidal vs Nate Diaz is one which many UFC fans are looking forward to! While it is over a month and a half away, it continues to be a very exciting prospect and possibly a match of the year contender given the two experienced names who are going to fight it!

While Khabib vs Poirier was an excellent fight, it was more of a mat game – and mat games tend to be interesting but they rarely ever are exciting. Diaz vs Masvidal, on the other hand – is going to be a pure fight – a bloodbath!

If you needed the BMF title to be interested in Diaz v Masvidal, then it says a lot about you.

I'll be watching a bad ass fight this weekend between two bad mother fuckers and I don't need anything on the line besides rankings to get excited about it.

Jorge Masvidal vs Nate Diaz is a fight between two legitimately tough men fighting each other. This is the first time since McGregor vs Diaz that a non-title main event is headlining a UFC PPV. However, Dana White has introduced a one-and-done title here, The BMF Championship, specially created for this fight.

So I like Masvidal as much as the next guy, but how does he win a 5 rounder against Nate? Gimme plus odds all day on Diaz.

Nate Diaz vs Jorge Masvidal – Fight of the Year?

Given the two men involved in this and their love for brutalizing and mauling their opponent, it is indeed one of the strongest contenders for UFC’s match of the year 2019 candidate – unless Khabib Nurmagomedov vs Tony Ferguson happens in December. 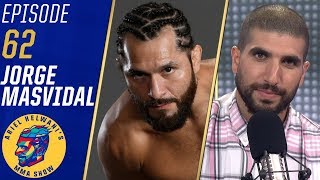