PlayStation 5 is finally official! After years of speculation with regards to when the much-awaited console from Sony is going to release, the company has officially announced that PS5 is coming! Along with the announcement, we also got our first look at this gen-next console – it gets a makeover after years and a new controller as well!

Let us take a closer look at the PlayStation 5 release date, the new features and all that we know so far.

With the PlayStation 5 being announced, I've been thinking – is there a limit to how realistic we can make games look? Once it looks like real life, where do we go from there? More flashy colors/particles? Surely graphical fidelity eventually has its limit….

PS5 has been announced by Sony to release in late 2020. This only means one thing – Sony has eyes on the lucrative holiday season, which is usually the time console sales are at their highest! While Sony has announced PS5 for late 2020, it will also be interesting to see if Microsoft decides to take on the challenge head-first and launch their new XBOX at the same time next year!

Let us now take a closer look at everything that we know about PS5 so far!

Recap of PS5 details from yesterday:

The fifth-generation PlayStation from Sony is all set to bring out a number of changes. First off, the way we know the device to be shaped like is changing! As seen in the pictures here, it has got a whole new shape to it! Sony has also pointed out that the focus of PS5 will be to provide gamers with a more immersive experience of the games that they play.

The new and improved PlayStation 5 controller will also feature a number of new elements, with the two key changes being improved haptic feedback and the ability for game devs to program how they want the L2 and R2 buttons to feel like so that the users can get a real-time sensation of pulling an arrow on a bow, etc! 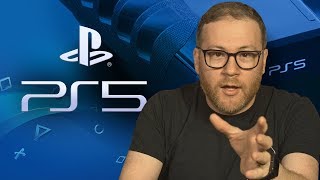