Antonio Brown has created another problem for himself and this time it could do some really hard damage. The NFL wide receiver who recently joined the New England Patriots was accused of two sexual assault lawsuits. While the first woman met with the NFL committees on Monday, the second one is that could end the entire career of Antonio Brown.

It is being reported that Brown send intimidating texts to her accuser on Wednesday night and she has shared the screenshots with the popular magazine and site Sports Illustrated. If the messages are indeed sent Brown or his associates, it could simply mean losing the lawsuit and getting banned from playing in NFL for the Patriots.

The woman claims that Antonio Brown hired her two years ago to paint a mural of himself in his house. But when he made sexual advances towards her, she left the job in between. She never thought of reporting Brown to the authorities as the star never contacted her back, but with the recent rape allegations by Britney Taylor, she decided to become a part of the moment.

New tonight: Antonio Brown sent our source from Monday’s story menacing group text messages, including a picture of her children with instructions for his associates to investigate her.

Her lawyer wrote the NFL calling for the intimidation to stop. https://t.co/rCTM8WSI6Z pic.twitter.com/QtONzBf7Ig

In the screenshots shared, the texters have accused the woman of being broke and making money by filing a lawsuit against Antonio Brown. It also contains pictures of the woman with her kids and it is constantly said that she is the broke mother of broke children.

NFL can Suspend Antonio Brown for the Texts

Antonio Brown’s lawyer Darren Heitner was also included in the group texts but he has advised Brown not to contact this woman. Lisa J. Banks, the lawyer of the accuser woman has attached the text conversation screenshots in the report sent to NFL and the Patriots.

Last year, Antonio Brown boasted he had a “huge Nike deal.” In February, the company came out with an Antonio Brown trainer. Today, a Nike spokesman says “Antonio Brown is not a Nike athlete.”

If those messages are indeed sent by Brown or his associates, New England will have to immediately suspend him to avoid further controversies. Antonio Brown already lost his Nike endorsement deal due to the lawsuit and could soon get suspended from NFL with a lifetime ban. 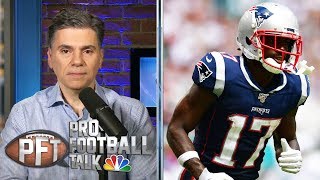