Antonio Brown is facing another lawsuit, it sounds so strange but that is true. The new wide receiver for Patriots was accused of rape by his former trainer Britney Taylor. While the whole thing is still under investigation, another woman has accused him of sexual abuse while maintaining her anonymity. The woman claimed to have worked at Brown’s house in 2017 where he was impressed by his portrait in Steelers uniform.

Patriots WR Antonio Brown was accused of sexual misconduct by a second woman, according to @RobertKlemko pic.twitter.com/r2AB3fElgz

The woman has said that Brown appeared completely naked in front of her with only a towel covering his genitals. She kept working on the painting ignoring the sexual advances but the recent case by Taylor has given her the courage to do so. Brown has denied both the accusations and his lawyer claims that both the rape lawsuits are totally fake.

Darren Heitner, Brown’s lawyer and the attorney have dismissed every such report and claims they are just a means to extort money out of him. Brown himself reviewed the report about the second woman accusing him of rape and has denied it completely.

Antonio Brown has reviewed the sexual misconduct allegations made by an unnamed artist included in a recently published Sports Illustrated article and denies that he ever engaged in such activities. There will be no further comment at this time.

The star has refused to comment further on the matter but made it clear that he was not involved in any of the accusations. Every charge is falsified and whatever Brown did with those women was totally consensual.

Brown is focusing on NFL Games

Antonio Brown has been involved in a lot of drama recently, where he made the move from Steelers to the Raiders. He even started throwing tantrums and missing practice sessions and was finally released by the Oakland Raiders. It is what Brown always wanted as the New England Patriots signed a deal with him on the next.

I think it's safe to say Antonio Brown was locked in today #Patriots pic.twitter.com/bakApQkoQX

Brown has been attending practice and meeting with every Patriots team member. He even played in the Week 2 game against the Dolphins and scored a touchdown, with four receptions on 56 yards. Brown is currently focusing on the NFL and keeping his mind away from all such controversies. 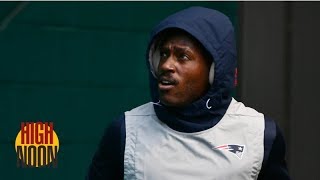