Antonio Brown and New England Patriots have a totally different image in the minds of fans and now they are connected with each other. The Patriots didn’t miss a single day to sign Brown after the Oakland Raiders released him. Maybe the whole drama with the Raiders was an elaborate plan to get a deal with the Patriots.

NFL fans could have forgotten Brown for his sports-related controversies but the recent rape charges against him are something which can’t be taken lightly. Fans of Patriots and other NFL viewers are not happy that Brown is still playing the Sunday game against Miami Dolphins. They have started to hate the Patriots too and are constantly booing Antonio Brown on Twitter amid the rape charges accusations.

The Patriots are somehow avoiding every question regarding the involvement of Antonio Brown and yet he was practicing with the team flew to Miami in the same plan with other players. Tom Brady told the reporters to only ask him questions regarding himself and not others. Patriots coach Bill Belichick also stayed mum on the whole Brown sexual assault case and ended his interview in between.

So let me get this straight. Robert Kraft said he wouldn't have signed Antonio Brown if he knew about the rape allegations. But, heck, let's just put him in the lineup right away anyways.

I love Tom Brady, but him throwing a TD to Antonio Brown has mixed feelings written all over it… Maybe it is because of the rape allegations. Not sure

Of course Antonio Brown is playing today, despite being accused of rape. But don't worry, the @nfl will still dress up in pink next month to show us how much they care about women. #NFLSunday

The fact that Antonio Brown is active and playing today is absolute crazy and it's what makes the NFL a fucking Joke!!! Only in the NFL can you fake a mental break down, get yourself out of a 30mil dollar contract, sign with the defending champs, be accused of rape… 3 times…

New England Patriots are the best NFL team who’s on the peak and they have a lot of fans all around the world. But their decision to let Brown play in the Patriots vs Dolphins Sunday game is not appreciated on Twitter or any other social platforms. Fans now want the Patriots to lose badly as a punishment for playing along with Brown as their wide receiver.

Patriots should not Play with Rape Accused Brown

Antonio Brown has already been hated by a lot of people and most of them make fun of him. People on Twitter claims that Brown has gone insane due to his head injuries. No one is ready to digest the fact that Brown who has been accused of rape will play for the champion team New England Patriots.

Antonio Brown was credibly accused of rape LAST WEEK and is catching touchdown passes today. Was suspending him until the issue was resolved/investigated not an option?

Antonio Brown has a rape charge and is allowed to play football?! Boycott the @NFL they are an absolute joke

Can someone tell me how Antonio Brown is accused of rape and yet is still playing in today's game?

Fans have already started a hate campaign against Brown and they are criticizing him for his actions. There have been a lot of tweets about Brown and how he doesn’t deserve to play. It might be totally possible that people even start booing in the Miami stadium when Brown goes near the corners. 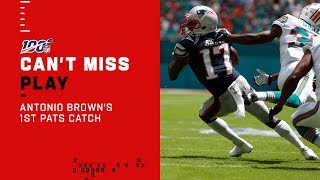