The iPad Air 2019 vs iPad Pro 2017 debate started almost a week ago when the Cupertino tech giant released its latest tablet without any prior announcement.

If you are considering to upgrade from iPad Pro 2017 version but unable to decide, here’s a short comparison that will help you decide.

Apple kept all the basic stuff intact with the same display, headphone jack, and touch id.

There are no drastic changes in the design department as both versions have the same size though the newer iPad Air 2019 is a little heavier than its older sibling iPad Pro 2017.

The iPad Air 2019 sports the same old 10.5-inch Retina display with true tone technology but the refresh rate is limited to 60hz in comparison to 120hz of  2017 version. It is fully laminated like iPad Pro 2017.

Since new iPad Air has Apple’s A12 bionic chip there is a huge bump in performance when compared to iPad Pro 2017 A10x processor.

iPad Air has also got newer connectivity hardware with a better Gigabit-class LTE and the latest Bluetooth 5.0.

Even with the latest hardware, there is no major improvement in battery life as both devices would work up to 10 hours of general use on wifi and 9 hours over LTE.

Newer iPad Air has got a  60hz display and 8-megapixel camera with no LED flash or Optical Image Stabilization in comparison to iPad Pro 2017 which has a 120 Hz display panel and 12 MP camera with OIS.

At this point, use-cases and price can also be a decisive factor.

Newer iPad is significantly cheaper in comparison to iPad Pro 2017.

As a user if you want raw performance and doesn’t mind on compromising for specifications like refresh rate, camera, and speaker than newer version is for you, otherwise, there is no need to upgrade. 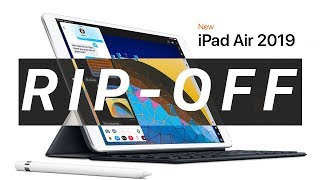