Anthony Joshua vs Andy Ruiz Jr. resulted in one of the most ‘feelgood’ moments in boxing in 2019. The shock win of Ruiz Jr over AJ was something that no one really saw coming and it caused a lot of excitement in the boxing community. Now that it is done and dusted, fans are looking forward to a rematch between the two.

Since the match, both men have commented on the possibility of a rematch and we know it is coming somewhere down the line. However, the dates of the rematch, too, now appear to have been decided. Here’s a closer look:

💪 Anthony Joshua back in the gym today, working on head movement for the Andy Ruiz Jr rematch. pic.twitter.com/sSkhcYHtrP

Anthony Joshua vs Andy Ruiz Jr. – When is the Rematch?

So far, we know that Ruiz had expressed his desire to hold the rematch in Mexico, which is the country his parents belong to. He fights under the Mexican flag and wants his home country to witness his match as a champion.

However, there were no certain dates. It now looks that they are down to three dates and are on the process of finalizing them, as per Eddie Hearn, who is Anthony Joshua’s promoter. November 29, December 7 or December 14 are the three dates under consideration for the Anthony Joshua vs Andy Ruiz Jr rematch.

Who is Expected to Win the Rematch between Joshua vs Ruiz?

It can’t really be said as to who would win an Anthony Joshua vs Andy Ruiz Jr rematch, but if betting odds are to be believed, Ruiz got lucky in their previous encounter but when it comes to a rematch, Joshua is likely to claim his titles back! Stay tuned with us for more updates about this match. 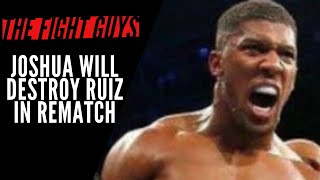