Battlefield V is the latest game in the shooter video game series developed by EA DICE and Electronic Arts. The main aim of the makers is always to make the game as realistic as possible. It is the reason why Battlefield 5 features most of the real world events and wars in their gameplay. While the previous versions were based on World War 1, the current games take place in World War 2 timeline.

The latest chapter 4 will be released soon and it will feature a brand new map and battles. A new video from the Battlefield 5 makers was released for the new map introduction. Here are all the features revealed and the future tease for Battlefield 5 game.

The new map release of Battlefield 5 will take us back to the year 1941 in the Battle of Greece. Italy invaded the German country and most of the new map will be set in Marita, Greece. 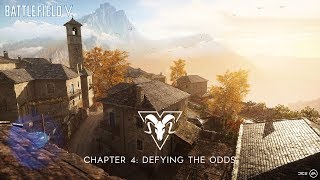 Battlefield 5: Chapter 4 will majorly be played on this map which features narrow streets on a hillside town. The new Marita map update will be free to install and release in July, 2019. EA will start the early access of the new map from June 27 and finish it in several phases.

During the EA play conference at the E3 expo, the makers also teased about the future Chapter 5 of Battlefield 5. It will include the new Pacific theater settings from World War 2. Chapter 5 will also be a free update and will be released by the fall of the 2019 year. The new chapter will focus on the American and Japanese armies engaging in combat on the Pacific islands. To be more specific, Battlefield 5 chapter 5 can be released in November, 2019.