Battlefield V, the FPS game developed by EA, has now gotten an update which brings a new map named Mercury alongside new weapons. The game is quite popular among gamers and releasing new content will only make things better.

Battlefield V recently unveiled their own battle royale style map titled Mercury and now this new update will drop on May 30. Here’s the trailer concerning the new Map. 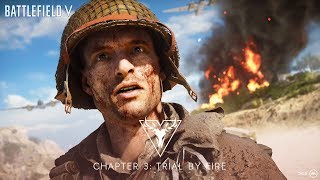 Available May 30 as a free update to Battlefield V, experience the new Mercury map when the fight moves to the Mediterranean, part of Chapter 3: Trial By Fire. Take on a massive invasion along the Cretan coast, based on the real-life World War II events of Operation Mercury.

This injection of new updates will keep the game thriving and will make the game more relevant.

The likes of Fortnite, Apex and such are giving a tough competition to this EA title, only the constant flow of new content will help Battlefield V to solidify itself.

The new map is based on Operation Mercury which happened during 1941. The map will feature rocky slopes and a vertical gameplay style.

Mercury will be a fast-paced map with small to large vehicles alongside Infantry and Aircrafts.

The key as to how to survive on this map is to be very observant of your surrounding. Keeping an eye on flanking routes is a good way to succeed on this map. You should always move on this map, one should always flank and take cover when necessary. Battlefield V is currently available on PC, PlayStation, and Xbox.