All Elite Wrestling is all set to debut their first-ever TV show starting Wednesday, the 2nd of October: Wednesday Night Dynamite! This AEW show is expected to finally offer the viewers the WWE alternative they’ve wanted for a really long time now. There has been a lot of hype behind this show and almost a year’s build-up is going to pay off at the event.  This will also be the night AEW goes head to head with WWE NXT, kicking off the Wednesday Night Wars!

A little something to get you ready for Wednesday… #AEWDynamite show open!

How to Watch AEW Dynamite Online and Live Stream?

First off, those looking forward to watching AEW Dynamite’s debut show on TV, get in touch with your cable operator and ask them to get you TNT network. For those looking forward to watching it online, you’ll need to get access to services that allow you to stream the TNT network online. This includes Fubo TV, Sling TV, Hulu with Live TV and PlayStation Vue.

For those wondering about the time and date, the show will air on the 2nd of October at 8 PM Eastern Time. The show will air at the same time in Canada too, where the fans can watch it on TSN.

What to Expect from AEW Wednesday Night Dynamite?

One of the biggest questions heading into AEW Dynamite is – what’s the situation with CM Punk. Is he going to join WWE as a host for SmackDown or is he going to make an in-ring return at Wednesday Night Dynamite? In addition that, AEW World Champion Chris Jericho along with LAX will face off against Kenny Omega and The Young Bucks in what is expected to be the show’s main event! 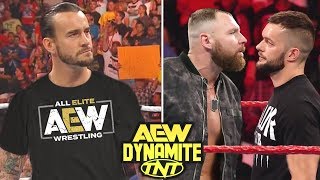