The fight between Khabib vs Tony is one which we have all been eagerly awaiting for a really long time. Two of the best names in the lightweight division to finally face-off and compete in a fight which will bring together two radically different styles: the mat-style wrestling of Khabib and the all-out brawl of Tony Ferguson.

However, there’s more to this match than what meets the eye. Tony Ferguson has been around for a really long time and if he fails to overcome Khabib Nurmagomedov, there’s a word that El Cucuy might just announce his retirement soon.

What to Expect from Khabib Nurmagomedov vs Tony Ferguson? When Will it Happen?

The fight between Khabib vs Tony is expected to be an all-out war. Khabib would try and keep Tony as grounded as possible while Tony would like to avoid that at all costs and would like to move around freely so that he can connect his vicious elbow strikes and make Khabib bleed! In his 28 match MMA career, Khabib has never bled while Tony has a habit of leaving his victims in a pool of their own blood!

As of now this fight does not have an official date but both men have shown interest in this – and so have the UFC management. Dana White has been talking about this for some time now. It is expected to be announced for January or February 2020.

Will Tony Ferguson Retire if He Loses?

The big question here is – will Tony Ferguson retire if he loses to Khabib Nurmagomedov? The answer is only with Tony at the moment. He has had a career full of injuries and might want to tread carefully! Does he want a fight against McGregor or GSP after this (no matter what the result)? There are only a few men left for Ferguson to defeat and it seems that a loss here could mean he can retire in peace knowing that he lost to one of the best! 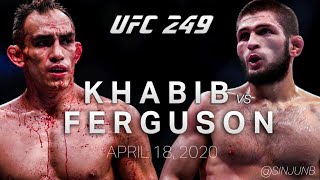