Jorge Masvidal vs Nate Diaz is one of the most awaited fights of not only UFC 244. but of the year! Two of the ‘baddest’ men on the planet are going to fight it out for the BMF championship! However, a huge disappointment might be on its way for fans of the sport as it now appears that this fight might be off the table due to an injury-related issue for Jorge Masvidal!

Let us take a closer look at what happened and will the fight be cancelled or will it be replaced by someone else?

Nate Diaz status unknown if he'll remain on the card. UFC looking for a new opponent.

Jorge Masvidal vs Nate Diaz Cancelled Because Masvidal is Injured?

This is a fight of epic proportions! It has even got Dwayne ‘The Rock’ Johnson interested and he has promised to attend the show and to award the winner with the BMF belt! However, based on a number of Twitter users’ comments, it appears that Jorge Masvidal has been injured and will no longer be participating in the fight.

While the nature and the extent of his injury is not clear as of now, but if it is indeed true it is going to be mighty unfortunate! For someone so late into the career to get injured, that too before perhaps the most important fight of their night is really sad. Masvidal was expected to win the fight too, so much so that Nate Diaz might have been considering retirement after this!

While it is not confirmed if Jorge Masvidal is really injured, if he were to get injured, Dana White is likely to pull all the strings possible to try and get Conor McGregor on-board with him to return to UFC in a third fight against his old nemesis Nate Diaz, against whom he has a win-loss record of 1-1. It will be interesting to see what happens in case Masvidal is really injured. Stay tuned with us for more on this! 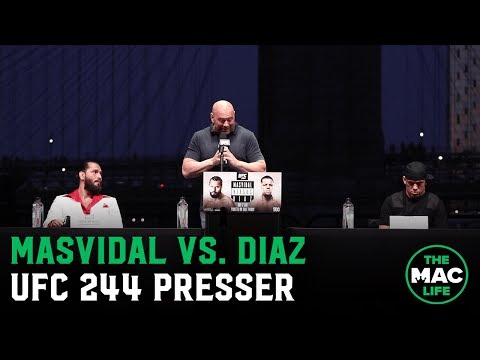