Robert Whittaker vs Israel Adesanya at UFC 243 is an unfortunate victim of being placed at just the wrong point of time. Sandwiched between two iconic main events of Khabib vs Poirier at UFC 242 and Diaz vs Masvidal at UFC 244, the UFC 243 event, headlined by Whittaker vs Adesanya appears a little lacklustre. But the two men sure want to prove everyone wrong once they get inside the Octagon!

A returning UFC Middleweight Champion, Robert Whittaker is looking forward to challenging Israel Adesanya, the interim champion in his absence. It will be interesting to see who will leave the arena as the unified champion.

UFC 243 Whittaker vs Adesanya: Who Will Win?

The main event of UFC 243 will witness a hard-hitting bout where the undefeated Israel Adesanya is going to try and defeat the returning Robert Whittaker – one of the toughest men in the Middleweight division. While Whittaker is more experienced of the two, Adesanya has been really impressive in the recent past.

Many are already calling it the match of the night. However, it is expected that Robert Whittaker will lose on his return and Israel Adesanya will exit the arena as the unified Middleweight Champion after UFC 243.

Hope I don't jinx it but I think Whittaker vs Adesanya will be top 3 MMA fights of all time.

What’s Next for Robert Whittaker After UFC 243?

While Whittaker vs Adesanya is expected to end in the favor of the undefeated Israel Adesanya, his opponent is likely to announce a retirement if he loses. Given that he was recently injured and has already had a long and established UFC career, perhaps it is the right time for Whittaker to hang up his boots if he loses. 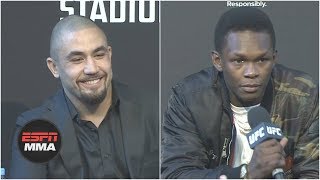