Robert Whittaker vs Israel Adesanya at UFC 243 is all set to be an interesting match. Adesanya, 17-0 in his MMA career, is all set to face off against perhaps the biggest threat to his undefeated streak. Will Robert Whittaker be the one who finally manages to defeat Adesanya or will Adesanya walk out of UFC 243 as the unified middleweight champion?

Let us take a closer look at this fight and see what’s going on in the middleweight division!

Costa says he’s waiting for the winner of Adesanya v Whittaker. Crowd boos but he’s right. He’s most likely next.

UFC 243 Whittaker vs Adesanya – Tale of the Tape

Whittaker was the middleweight champion since 2017 when he defeated Yoel Romero for the title. Following his rematch against Romero next year, Whittaker had to undergo surgery – and he has since been out of action. Meanwhile, Israel Adesanya has emerged as the interim UFC Middleweight Champion and at UFC 243, this fight will decide who the unified champion is.

Israel’s win over Anderson Silva put him in the spotlight and he has since been the talk of the town. It will be interesting to see who wins Robert Whittaker vs Israel Adesanya once the two clash.

As of this writing, it is expected that the undefeated Israel Adesanya will extend his streak to 18-0, making Whittaker his 18th and latest victim and also becoming the undisputed UFC World Middleweight Champion. Stay tuned with us for more updates on UFC 243 and Robert Whittaker vs Israel Adesanya. 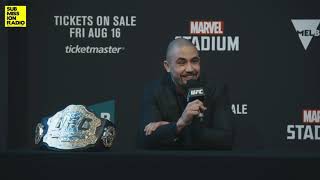