Are you waiting for the Khabib vs McGregor rematch to finally happen once Khabib wins in UFC 242? Well, you might be up for a disappointment as this much-awaited rematch just might be canceled! It seems that Khabib will not accept Conor’s challenge, neither will he challenge him.

Let us take a closer look at why we believe that this rematch isn’t going to happen:

Khabib Nurmagomedov will NOT Challenge McGregor: Here’s Why

If Khabib wins the match, he is likely to avoid challenging McGregor or accepting his challenge because the two are intense personal rivals. Moreover, Khabib, who is on an undefeated streak of 27-0 is looking forward to bigger challenges and is likely to face the likes of Nate Diaz once his fight with Masvidal gets over.

McGregor too, has accepted the fact that McGregor vs Khabib II might just not happen anymore and he is looking forward to anyone who is willing to fight him. He even namedropped Ferguson, Holloway, Aldo, Masvidal and Gaethje at a recent interview. This makes it clear that McGregor vs Diaz is totally off the cards.

Conor McGregor tells @arielhelwani that he wants the world title bout with Khabib Nurmagomedov in his comeback. But says he won't wait around for him. Mentions Masvidal, Aldo, Gaethje, Ferguson, Holloway & more. Says he will fight anyone. @TheNotoriousMMA

What’s Next for Khabib and McGregor?

Khabib and McGregor are two big names fighting in the same division and their paths are likely to collide once again. While McGregor wants to face Khabib, the Russian is in no mood to give the Irishman that opportunity. It will be interesting to see who they decide to face next. 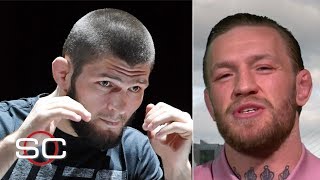