Pacquiao vs Thurman, the much-awaited encounter between Manny Pacquiao and Keith Thurman is just a few hours away. As the two titans clash on the 20th of July, the world will be watching! While those following the two up close have often pointed out that Thurman is expected to win the bout, many support the Pac Man as well.

In an interesting observation, it now appears that Pacquiao’s technique might just cost him the match. It is a rather odd thing to say about such a veteran of the sport but let us take a closer look. 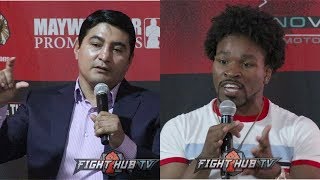 Pacquiao, instead of giving his body enough rest, has been practicing way too hard. Given that he is in his forties now exerting himself beyond a certain point might just become counter-productive for the Filipino boxing legend. Instead of going for his tried-and-tested approach of taking days off in between the training in the past, Pacquiao wants to give it his everything in preparation for Pacquiao vs Thurman, and many are afraid that this might just be his undoing.

Keith Thurman vs. Pacquiao tmr who YALL got

I’ve come to the conclusion im putting 100$ on that draw tomorrow in the #PacquiaoThurman fight. +2000 odds and I can’t figure out who’s gonna win, could see boxing judges pulling some shit to get a rematch…

Those who have been following the entire Pacquiao vs Thurman saga right from the beginning expect the undefeated Keith Thurman to build upon his winning streak. As of this moment while nothing can be said, but it does seem to be Pacquiao’s swansong bout in the world of boxing. We’ll know more in just a few hours, stay tuned!