Pacquiao vs Thurman is a match that has got everyone excited! Be it the hardcore boxing fans who have been watching since the days of Ali vs Frazier or be it the casual fans who watch the occasional bout – this match has gotten everyone abuzz! However, for all the hype that it has generated, both the boxers want to end the match as soon as possible! Let us take a closer look:

Pacquiao vs Thurman To End in Just a Few Seconds?

Given that the rivalry between the two men involved has gotten really personal, with Thurman making comments such as wanting to ‘crucify’ Pacquiao and retire him, calling him a 40-year-old boxer who is too old, Pacquiao has retorted with his own comments stating that he will teach Thurman a lesson on how a forty-year-old boxes like.

Both the men want to knock each other out and Thurman has claimed that he won’t let the match go beyond two rounds. Later, he claimed that he could easily knock out the Pac Man in just seconds! Pacquiao vs Thurman continues to get intense as less than ten days remain.

Who is Expected to Win the Match – Manny Pacquiao or Keith Thurman?

As per the betting odds, Keith Thurman is expected to win this match between Pacquiao vs Thurman. Given that Thurman has age as an advantage and that the Pac Man has slowed down over the years – betting odds at the moment support Keith Thurman defeating Pacquiao at the match on 20th of July. 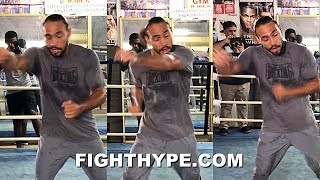