Green Bay Packers defeated the Minnesota Vikings in NFL Week 2 Sunday night to lead the series by 2-0. The Packers are in full form and after winning both their opening game against the Bears and Vikings. Denver Broncos will be their opponent in the Week 3 and the most of the experts are predicting the Packers to beat them too.

There are high chances that the Packers move forward 3-0 in the third week of NFL 2019 season by winning the Packers vs Broncos game. The Broncos are in no shape to give them a fight and lost both their opening games. Oakland Raiders and Chicago Bears defeated the Broncos in Week 1 and Week 2 and they stand no chance against the strong defense of Packers protecting Aaron Rodgers. Here are the betting odds and winner predictions for Packers vs Broncos Week 3 game.

The Packers were almost about to lose to the Vikings as they were unable to score a point in the second half of the game. But their defense stepped up and saved the day for the team. It shows that the team doesn’t depend on Aaron Rodgers and their offensive names to secure a victory.

Most of the NFL teams are hardly balanced and only one of their side is fully functioning. The Broncos also have a great defensive side but the problems is they are not backed up by their offense and which is resulting in disastrous loses for them.

Green Bay Packers are obviously the stronger team in comparison who also have their numbers up. The only way Denver Broncos can win the Packers vs Broncos game is if they can stop Rodgers and Matt LaFleur from scoring any touchdowns.

The #Packers open as 8.5-point favorites over the Broncos at Lambeau next Sunday, per @betonline_ag.

Next week the packers home will be invaded by some orange donkeys that call themselves broncos. They suck. Let’s stick it to em

Broncos have Von Miller and Bradley Chubb to attack Aaron Rodgers and the game can get intense. The Packers would also have to slow down Phillip Lindsay or else it could a create a lot of problems for them. Green Bay has another advantage of playing at the Lambeau Field, and they hardly lose at the stadium. 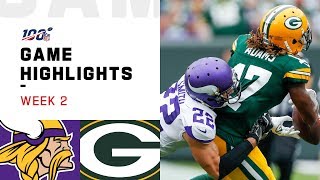