NFL 2019 season has entered Week 5 and there have been a lot of injured players that need to be replaced. Apart from that, some players are on holdout, some have requested a trade and some are not performing and their teams might release them. NFL trade deadline is on October 29 which is now less than a month away. Here are the rumored Week 5 trade deals for Melvin Gordon, AJ Green, Adrian Peterson, and Trent Williams

Melvin Gordon has decided to end his holdout with Los Angeles Chargers but it doesn’t mean that he will stay there for long. The Chargers have already found a replacement in Austin Ekeler and Justin Jackson at the running back position. Ekeler alone has rushed for 490 yards and made six touchdowns which are enough to replace Gordon. The Chargers can trade Gordon to teams such as Kansas City Chiefs or the Miami Dolphins who have a dire need for the RB.

Melvin Gordon was started in 10% of leagues.

A live look at Gordon: pic.twitter.com/43LZ8YeaGR

The Cincinnati Bengals wide receiver AJ Green has almost recovered from his ankle injury but has no plans to play in the team. The Bengals are one of the worst performing teams in the 2019 NFL season and have lost all four of their games. Green is a much better player who deserves a better team and can provide valuable contributions to the contending teams like Green Bay Packers or Seattle Seahawks.

AJ Green reenacts downs 1 through 4 by the Bengals offense: pic.twitter.com/J5FaByk0FB

The Washington Redskins also faces the same issues as the Bengals and they have no future in the current NFL season. Adrian Peterson, the veteran running back is wasting his time on an offensive side that couldn’t protect their players. Also, the head coach Jay Gruden is not happy with Peterson despite his own faults. Peterson himself has revealed that he could go with the Packers or the Chiefs very soon.

– when Zeke has been held under 75 rushing yards, Prescott is 1-7

Trent Williams has made it clear that he won’t join the Redskins under any condition and given how the team is at 0-4, they also don’t need him anymore. A lot of NFL teams are missing out strong offensive tackles and Williams could easily get a deal from anyone of them. The New England Patriots and the San Francisco 49ers could sign Williams to replace their injured tackles.

Why the hell is Trent Williams still a member of the Washington Redskins? 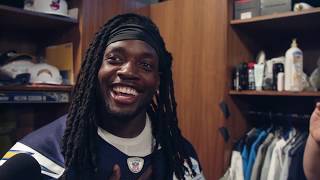