Antonio Brown has not played a single game with the team of Oakland Raiders and there are already reports of him leaving the team. It was Brown who asked for a move out from the Steelers and joined the Raiders earlier this year. But ever since his entry in Oakland, Brown is somehow missing every practice session and match.

Sources: The #Raiders are not planning to have WR Antonio Brown for Week 1. It’s not clear if it’s a suspension or if he’ll be merely inactive. But those are their plans. He likely will stay away from the team.

It was a frostbite at first, then the helmet issue and now he is angry over the team fining him. There are high chances that the Raiders kick him out and Brown can make new deals with Carolina Panthers, Green Bay Packers and New England Patriots.

The Panthers needs a star wide receiver to support their main quarterback Cam Newton for a long time. D.J. Moore and Curtis Samuel are currently doing the job but Antonio Brown will be a much better addition to their offensive line.

Antonio Brown to the Panthers. You heard it here first! 🍅💥👤

Newton needs someone who can help him on the field so that the Panthers can become a solid contender. Brown won’t even be that expensive given how things are going with Raiders and Newton would love to repeat his Super Bowl performance for the Panthers.

Green Bay Packers were one of the rumored destinations for Antonio Brown when he was moving out of the Pittsburgh Steelers team. Imagine having someone like Brown to pass the ball to Aaron Rodgers, the combination will be enough to shatter any defensive side in NFL. Brown and Davante Adams are good friends and it won’t be much trouble for the Packers to provide him a calm atmosphere.

The name of New England Patriots sound shocking in the list but it makes a lot of sense. Tom Brady is 42 years old and he needs a weapon like Antonio Brown to get back to its groove. There are also rumors that Brown is doing the whole drama in Raiders so that he can join the Patriots and make a run for Super Bowl 2020.

The Patriots will have an offense that includes Brown, Josh Gordon, and Julian Edelman as the top three names. There won’t be any NFL side to stop them and New England would be lifting their second Lombardy trophy in a row. 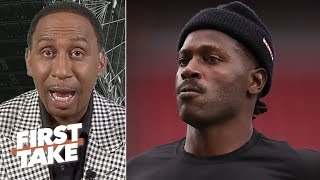