Antonio Brown has been missing the practice sessions with the team of Oakland Raiders from the beginning. The whole thing started last year with the NFL safety committee banning several helmets over player safety issues. One of them was the Air Schutt helmet worn by Brown which he was wearing since the start of his career. Brown was so attached to the old helmet that he threatened to retire from football over that.

There were many legal battles fought over in the courts from Brown’s side but they couldn’t continue using the helmet. For a while, Brown showed up on the practice ground and things seemed to be fine with the Raiders. But it is not all well between the two sides, as Brown is still skipping the practice sessions with the Raiders over the helmet issue.

Antonio Brown has tried everything in his power to get his old helmet back and nothing has worked out so far. His management side even filed a grievance with the NFL for the old helmet but it was denied by the court. At first, it seemed that Brown is over the whole issue and it was just a stint for the HBO drama series Hard Knocks.

But the last Saturday, Brown has again shared his views and it shows that he is still very upset. It seems there is no end to the whole debate as the NFL officials are not even letting him use the newer model of the same helmet. The Raiders side are also now confused whether to remove Brown or support him.

Read more:  UFC News: Conor McGregor Will Come out of Retirement: But Only Under One Condition

Oakland Raider signed in Brown during March from the Pittsburgh Steelers and nothing has been working right for them. It is no doubt that Antonio is one of the best NFL wide receivers, but he needs to play on the ground for that. Brown was first missing the training camp due to frostbite in his feet due to cryotherapy accident.

The Raiders finally realizing exactly why the Steelers were so happy to trade Antonio Brown to them by week 2 of the preseason pic.twitter.com/5m0EhC69Fm

Now the same is being continued over the banned helmet issue. Mike Mayock, the manager of Raiders has issued a statement over the whole Brown issue. He said that Brown has exhausted their patience and now it will be all-in or all-out for the Raiders. 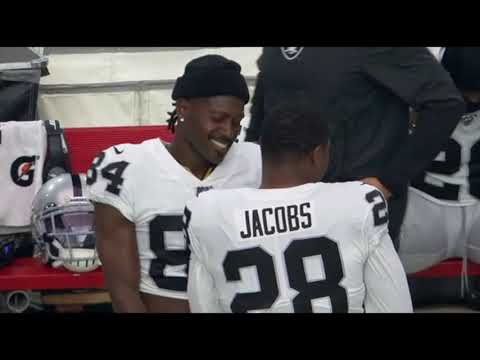