Dallas Cowboys have reached from top to bottom in NFL rankings in just a span of two weeks. While the Cowboys side started the 2019 NFL season strong with three straight victories, things went downhill after in the last two weeks. Even though Dak Prescott did his best in the Week 5 game against the Green Bay Packers, they still lost the game.

While many fans have started to wonder whether Dak Prescott deserves a new deal or not after the last two games, it is actually exactly the opposite. The Cowboys need to offer Prescott a new deal very soon or they could end up losing the rest of NFL games too.

Dak Prescott has been giving out his best despite other members of Dallas Cowboys not up to the mark. While the Cowboys failed in the Week 5 Packers game badly, Prescott still managed to rush for 463 yards with two touchdowns.

The opening quarterback of Dallas Cowboys ranks third in the 2019 NFL season and can improve even further. But there is a lot of pressure on Prescott to perform, which is why he was intercepted 3 times in the Packers game. Everyone in Cowboys has secured their extension, Prescott doesn’t have one and it forces him to perform.

There are rumors that Dak Prescott rejected an offer for $30 million a year and has asked for $40 million annually. NFL 2019 season has only started and there are a lot of high voltage games left. The Cowboys can’t back out at this moment and try to save money which can cost them so much later.

Dak Prescott has more interceptions this game than Carson Wentz has all season. That is all

But they call him “wINTz” pic.twitter.com/pr9vkwIlT6

The Eagles have already offered Carson Wentz a $32 million deal to secure him before the offseason. NFL trade deadline and the team breaks are coming soon, it would be wise of Jerry Jones to sign Prescott for a new deal very soon. 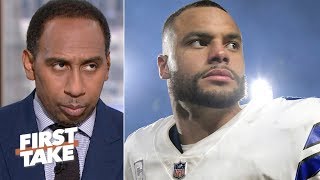