Dak Prescott might be in big trouble soon as he has been missing his game for the past two weeks. One person who is not happy at all with the whole dip in performance is the Dallas Cowboys owner Jerry Jones. While the 76-year-old businessman is connected more with his team on a personal level, there are some side-effects too.

Jones has given rich contract extension to all the major Cowboys players and would have done the same for Prescott but the last game against the Packers has changed. Dak Prescott might be leaving the Cowboys side soon as he was insulted by Jerry Jones for missing out simple interceptions in the NFL Week 5 game.

Jerry Jones has invested in the Dallas Cowboys team both financially and emotionally, which can come out sometime in the open. Jones is a fan of the Cowboys NFL team first and an owner later, and it was evident in the last game.

It came to the public eye during the Week 5 game against the Green Bay Packers, where Dak Prescott threw his third interception for the game. The camera then turned to the suite of Jerry Jones where he was frustrated over the play and was saying, “Come on, Dak!” The Cowboys owner was not at all happy with Dak and it might soon lead to something big and serious.

The Cowboys side has proved to be a total failure after the third Week of 2019 NFL season. While the first three games were played against the worst teams of Giants, Redskins and Dolphins, it was easier for Cowboys to win then.

Dak Prescott against any team over .500 pic.twitter.com/jojmMRVdw8

But as soon as they faced the Saints and Packers, Dak Prescott, Ezekiel Elliot, Amari Cooper and others were a total failure. It is something which can’t be taken lightly as the Cowboys owner Jerry Jones was dreaming for a Super Bowl run. But Dallas losing two straight games has now even clouded their NFL 2019 playoffs chances. 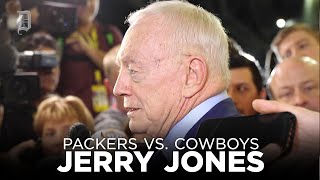