NBA free agency started and a lot of rumors and speculation have now changed about the fate of players. Earlier, it was stated that Kawhi Leonard will join the Los Angeles Clippers team, but now they have the least chance for a deal. The latest reports are saying that Leonard might join the Lakers or go back to the Toronto Raptors.

While the news of Leonard playing with LeBron James in the Lakers is a shock to many, it is actually a logical decision. The 2019 NBA finals MVP, Kawhi Leonard knows very well that he needs a strong team with other star players to win the NBA finals next year. It is not like Leonard won’t join the Clippers, a deal can be made if the team can somehow sign some other big names.

Even though most of the big names like Kevin Durant, Kyrie Irving, Jimmy Butler, etc are already traded, there are still a few talented players without a deal. One such name is Danny Green, with whom Leonard has played in the Raptors. Green has performed consistently good and is even considered by the Lakers as an alternative to Leonard.

Also, both the players have spent so much time with each other in the Raptors team, that they know each other’s gameplay. Kawhi Leonard and Danny Green is a great duo, which managed to get the first ever NBA championship for the Raptors. The Clippers team should meet with Danny and offer him a trade before the Lakers sign him. It might also attract Leonard, who is looking for some supportive players.

DeMarcus Cousins is having a hard time getting a good deal in the free agency, but his talent is still unmatched. The reason behind the poor deals is his constant injuries, otherwise, Cousins is an amazing player. Kawhi Leonard has faced him previously in the basketball court and knows that he is a very good player.

The Clippers don’t even have to spend much on DeMarcus Cousins, as he will happy in a contract bigger than his previous one with the Warriors. The rest of the money saved in their cap space can be used to offer a bigger and better deal to Leonard. Even though the duo of Leonard and Cousins sounds odd but has great potential in the future. 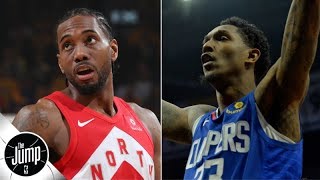