Miami Heat has surprised everyone with their performance in NBA 2019-20 season and with a 25-10 record, they are sitting at the third position in NBA Eastern Conference rankings. The gamble to sign Jimmy Butler has paid up and Miami is now looking at the next NBA title.

The @MiamiHEAT have the best home record in the NBA at 16-1. Until last night, they had scored at least 107 points in every home game.

Their 84 points in a win over the Raptors was the fewest points the Heat have scored in a win since April 2012. pic.twitter.com/c9k8w6TYep

Miami Heat team president Pat Riley is looking aggressively at the NBA trade market before the 2020 deadline but the problem is that they are limited salary-wise and can hardly afford the big names like Kevin Love, Chris Paul, Blake Griffin, Draymond Green and more. It is why rumors are saying Miami is planning to sign some affordable players such as Jrue Holiday, Robert Covington and Jeff Teague.

Jrue Holiday has been linked with the Miami Heat for the past few weeks and a deal could be made easily before the February deadline. Holiday might not improve the team’s locker room and interior issues, but he is an elite defender who will strengthen their perimeter offense.

Miami Heat might offer a trade package of Justice Winslow and Derrick Jones to get Jrue Holiday which would be them exchanging two offensively challenged defensive-minded point guard for a more well-rounded defender.

Robert Covington is also on the trade block as the Minnesota Timberwolves at 13-21 have barely any chance to reach the playoffs. Covington would be an amazing fit in the Miami Heat, the forward has a 6’9″ height and 7’2″ wingspan.

The best part for Miami is that Robert is only 29 years old and has a modest $24 million salary for the next two seasons. He is also currently one of the best 3-point shooters in NBA and it is something the Heat roster needs. Robert Covington would be the safest option for Miami Heat is scoring 13 points per game and having 35% perfect shots from the deep.

Jeff Teague is another name from the Timberwolves who are up for trade and have a more affordable contract at $19 million for this season. Teague could help Goran Dragic and they won’t have to worry about the team depth.

The Covington trade deal can be a little tricky with a third NBA team involved but Jeff Teague can be easily signed by the Miami Heat. The Milwaukee Bucks would most probably be one of the teams in NBA Eastern Conference finals and Miami needs to get every help they can get before the trade deadline. 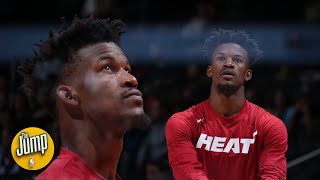