Miami Heat has started the NBA 2019-20 season with a bang and is having 9-3 record which makes them rank 3rd in the Eastern Conference. They could easily make it to the playoffs, but it would be very difficult for them to win the NBA Eastern Conference finals and make their way towards the NBA 2020 finals. In order to continue their streak, they would need some responsible veteran players who can also help other team members and especially Jimmy Butler who needs to stay calm during heated moments.

Chris Paul has been playing exceptionally very well for the Oklahoma City Thunder and has an average of 6.3 points, 4 rebounds, and 5.4 assists, 45.9% shooting from the field and 42% three-point shooting. Miami Heat is having an average offense point rate of 102.15, which ranks currently 16th in the NBA league.

Heat get Chris Paul and they're a Finals threat

There is surely a lot of room for improvement for both sides and Paul has been amazing whenever the ball is in his hands. The Heat could send out a package of Goran Dragic, Meyers Leonard, Derrick Jones Jr. and a 2nd round pick to the Thunder and get Chris Paul in exchange, the price may be a bit high but it is necessary risk to be taken to win the 2020 NBA finals.

Kevin Love is once again playing great for the Cleveland Cavaliers with an average of 18.7 points, 12.1 rebounds, 44.5% shooting from the field and 34.3% three-points shooting. The 3-point shooting rate of Love would get much better in Miami Heat as the whole team won’t depend on him like Cavaliers and he can play at the No. 2 or No. 3 spot.

Miami Heat can give away Justice Winslow and James Johnson to the Cavs in exchange for Love, which might not be enough, but a deal can be sealed with proper negotiation. Although it is just in theory that why would Miami go to such extent for two players, Paul and Love have the ability to take any team into NBA finals and the risk is worth taking. 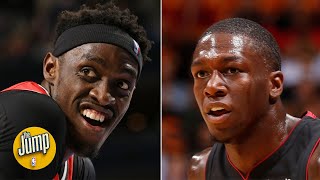