NBA 2019-20 season has completed two months and now everyone is looking forward to February 6, 2020 trade deadline. Trade rumors for big players are surfacing and we will see a lot of jerseys getting changed very soon. Also, there are many big names who despite being not on the trade block are dealt with when the deadline appears. Here are the NBA deals rounded up for big names such as Kevin Love, Jrue Holiday, Chris Paul and Robert Covington who will be up for grab on the trade block.

Kevin Love as rumored since the last few months is finally placed on the trading block by the Cleveland Cavaliers who are planning a major rebuild. While there are a lot of teams such as LA Clippers, OKC, T-Wolves, etc. ready to sign Love, the Cavaliers are asking a very high price which includes one first-round pick and one active young player. Despite that looks hard, Kevin Love could make a difference in the big games and some team would be willing to take the risk.

Jrue Holiday is one of the best point guards in NBA today and every team values the position as the No. 1 impact spot. The veteran guard from New Orleans Pelicans is already on the trade radar for several big teams and even the Pelicans are ready to move Holiday. NBA teams such as Miami Heat and Minnesota Timberwolves are willing to upgrade their backcourt and Jrue Holiday would come for two years at nearly $53 million.

The Miami Heat’s interest in Chris Paul is reportedly ‘extinct’, per @KevinOConnorNBA

Chris Paul was never going to stay in Oklahoma City Thunder for long as the rebuilding team has no use of an aging point guard at $40 million per year. It will be hard for OKC to find a team that would provide them young assets in exchange for CP3 who has passes his prime years but they will be still looking at any offers on the table. Miami Heat could be one of the team as they have chances for contention and they need someone experienced like Chris Paul to carry them in the big games.

Robert Covington is up for trade as the Minnesota Timberwolves don’t have a future this season and they are planning to trade out big names. Covington has an average of 12.5 points, 5.3 rebounds and 1.4 steals per game and is shooting 35.7 percent three-pointers this season. With two more years on his contract at $13 million per year, any team would easily bid for Robert Covington as NBA February 2020 trade deadline is coming near. 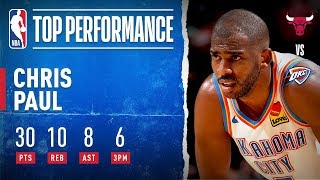