Carmelo Anthony has not played any NBA games and it will soon be a year since he was moved out by the Rockets. First, the Oklahoma City Thunder waivered him off and then no team signed him in the NBA free agency. Many of the people close to Melo believes that the player has been blackballed by the NBA teams and other media.

You’ll see a Video tirade Of Royce White dropping in the next few hours with him airing out Lakers’ LeBron James, mental health & him being afraid fly being “straight bullshit.” White also said he feels blackballed and that Carmelo Anthony is def being blackballed. Stay tuned.

Royce White, the Big 3 player from Dallas has said that NBA has sidelined Anthony and it is why he is not getting any deals. Etan Thomas, the former player from Dallas Mavericks has also experienced something similar and says media is trying to blackball Melo for the reasons unknown. Here is what Carmelo Anthony plans for the future as NBA teams have conspired against him.

Melo on his Future and Career

Melo himself has said that he will retire from basketball soon but doesn’t want to go out in this way. He still has a year or two left and what made it worse was the USA basketball team rejecting his offer to play in the FIBA world cup 2019. It is the main reason why Carmelo is spending most of his time with his son Kiyan and wife La La Anthony.

The 35 years old player has been with his son on his basketball games and teaching him the game. The mental happiness is most important for Anthony at this stage of life as one day he will leave the NBA for sure and retire from the game.

Deals with Lakers or Nets

Carmelo Anthony has been linked with various NBA teams including the Miami Heat and Warriors but none of them have worked out so far. Los Angeles Lakers are the team which has been in most of the trade talks due to LeBron James and Melo’s friendship.

Carmelo Anthony has been “participating in informal team workouts” with players from the Nets, per @IanBegley, @APOOCH pic.twitter.com/2e9FnTIjGI

The latest name in the trade rumors is Brooklyn Nets as they have a short term requirement. The Nets got Kevin Durant and Kyrie Irving in the free agency but the former is injured and won’t play for a year. It is why they could sign Anthony for a new deal which gives them an experienced player to bid time and Melo a chance to close off at a high point. 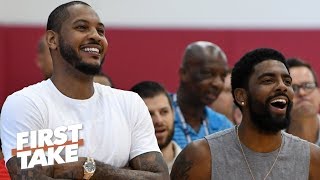