The New York Yankees are looking for a solid starting pitcher in the MLB free agency. The deadline of July 31 is only a week away and the Yankees needs to react fast if they want a deal. With each day, the list of potential targets for the Yankees is getting smaller and smaller. 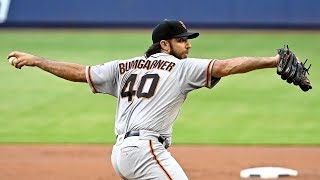 Madison Bumgarner and Will Smith from the San Francisco Giants were a top priority for the Yankees but the owner doesn’t want to give them so easily. The next names that the Yankees wants to sign are always in trade rumors and a deal looks difficult. Matthew Boyd from the Tigers and Zack Wheeler from the Mets could be offered a deal by the Yankees.

Matthew Boyd is available in the free agency market and a trade deal can be made. The only problem here is that the Detroit Tigers might ask for such a high price, it becomes impractical to make a deal. The way Tigers have dealt with their recent players, a deal for Boyd won’t happen so easily.

Seeing his name brought up a bit on here recently so just out of curiosity, would you be okay with the Yanks getting Matthew Boyd as their main deadline acquisition?

I rarely watch any #Tigers baseball…can someone explain to me how Matthew Boyd could have 34 Ks & just 20 H allowed in his last 19.1 IP but gave up 12 ER? His ERA keeps rising but seems to be nasty…no command within the zone? Curious as a #Yankees guy w/ deadline coming

The 28 years old pitcher Boyd is under team contract till the year 2022. He has an average 2.8 WAR and fifth with 152 strikeouts and ranks among the top ten pitchers. The only way Tigers trade out Boys is if the Yankees offer them a large amount or some fresh prospects.

The recent reports were indicating that the Yankees are more interested in Zack Wheeler as compared to Bumgarner. It has been now changed as the Wheeler has been added to the list of injured players for his shoulder strain. Wheeler had a 4.69 ERA in the games he played before and even got his name in the All-Star list.

Breaking: Zack Wheeler is being placed on the injured list with right shoulder fatigue, a source says.

The IL move is retroactive to Friday, so the soonest he can return is July 23. That leaves Wheeler with two starts max before the trade deadline.

Source: Zack Wheeler experienced shoulder fatigue yesterday while preparing for tomorrow’s start. Out of precaution, the #Mets are placing him on the IL. He is eligible to come off on Monday.

Although it seems stupid, the Yankees might trade for Wheeler as it won’t cost them any top prospect. The New York Mets and Yankees have not made any major player deal in the last 15 years and it could change soon.