Tesla the electric car manufacturing company has unveiled its Model . A small and compact SUV which is expected to hit the markets in 2020. As part of their shift to a mass-market automaker, the Elon Musk company is releasing this affordable vehicle.

Musk said that the Model Y had

“the capabilities of an SUV but rides like a  true sports car, and can basically do anything.” 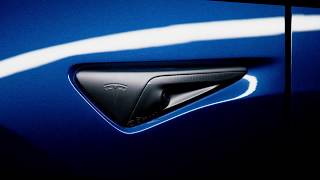 The new Model Y has a lot of parallels to Model 3, so much so that 75% of its components are similar. The Model Y will come in three variants the first one being the Long Range then the Performance model and finally the dual motor.

There’s also a standard model which will go up for sale for $39,000. All these models come with different set of averages and top speed.

The Dual Motor will have a somewhat lower average of 280 miles, satisfying top speed of 135mph(217kmph) and will take just 4.8sec to reach from 0-60mph.

The Performance model also gets the identical 280 miles of range but improves top speed to 150mph(240kmph) and lower time of 3.5sec to reach from 0-60mph.

Unlike the fancy Falcon Wing doors as seen on the Model X, the Model Y  instead uses the pillarless doors like the Model 3. The SUV also comes with
a glass panoramic roof and optional seven-seat layout. Each second-row seat folds flat, thus creating flexible storage space for your luggage and more.

The seating area is evaluated for the rider with a low dash, the driver in return has a chief view of the road. The interior of Model Y is quite simple and clean, with a large 15-inch touch screen and an immersive sound system.

There’s also the use of autopilot as seen on all Tesla cars the Model Y will also feature the same. Model Y will have Full Self-Driving capability, with necessary emergency warnings.

Model Y is an electric car which is congenial with Tesla’s third-gen superchargers. It should take you around 15 mins to recharge 168 miles of juice for your car. There are currently over 12,000 Supercharging stations worldwide.

For Tesla, there lies a tough road ahead of them. The competition from various car manufacturers around the world will challenge the company’s ambitions. Car makers like Mercedes, BMW, etc are already preparing themselves for the launch of their own premium and affordable set of SUVs. Only time will tell how good the Model Y will perform in the eyes of the consumers.