Khabib Nurmagomedov vs Tony Ferguson is a fight that has been announced a number of times in the past. Four times to be precise – and all four times, it has been canceled due to some reason or the other, mostly because one of them was injured. Now that we are at the brink of another potential Khabib vs Tony Ferguson fight, it appears that things have started to go wrong again!

This has the potential to be the greatest match in the history of UFC but it appears that the universe doesn’t really want this match to happen! Let us take a closer look!

Khabib vs Tony Ferguson Cancelled Yet Again Over Tony’s Injury?

If things were alright, Dana White would have made this announcement ages ago! Khabib would have called out Tony right after his fight and El Cucuy would have responded right back. These are two men wanting to go at each other for quite a long time now. However, the fact that it hasn’t happened already means that there is indeed something amiss.

Tony Ferguson’s knee injury has been a problem that has been nagging him for quite some time now. It appears that the injury has been aggravated once again and might be the reason why Khabib Nurmagomedov vs Tony Ferguson might not happen anytime soon! Most people were expecting this fight to take place at UFC 245 or UFC 246.

Khabib vs GSP Confirmed Next?

Now that Tony might be out of the picture, there’s a good chance that Georges St-Pierre kicks back into action for one last match. The UFC legend had announced his retirement from the Octagon not so long ago, but now that he is getting a chance to face Khabib, who he sees as the greatest UFC fighter in the modern-day and age, we might just get Khabib vs GSP, which was hinted by Dana White as well! Stay tuned for more on this. 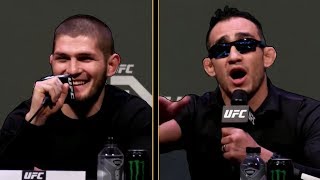