Game of Thrones season 8 episode 4 is going to open many doors to many possibilities now. The Long Night has claimed many lives and now it’s time to look at the bigger picture. The Iron Throne is up for grabs as Daenerys is getting ready to take her rightful throne.

Till now, the fans had expected the Night King to be the ultimate villain who is going to destroy everything. But, ultimately Arya Stark managed to stab the Night King and bring an end to the battle. It was an awesome ending. But, a lot of people were left wondering about the Night King’s mysterious identity which will now never be revealed.

HBO released a 40-second promo and a few pictures of Game of Thrones season 8 episode 4. So, here’s what we know about them so far. 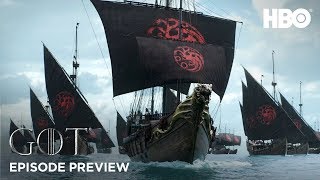 First of all, the duration of the episode is going to be 1 hour 20 minutes, just like the previous one. We get to see shots of Euron Greyjoy and Cersei Lannister looking smug. So, they are probably planning something that will not turn out good for Dany and the others.

We also saw Daenerys’ fleet sailing through the Narrow sea, which means they are headed for King’s Landing. And there is a mass funeral for the Long Night’s martyrs.

Here we can see Dany and Drogon looking off into the far distance. So, they might be looking at the large fleet of sheeps. Or better, they have already reached King’s Landing and admiring the country they are going to take over. But, there might be some in house enmity as well. Till now, they had a common enemy: The Night King and the army of the dead. But, now the target is the Iron Throne. Jon might be sandwiched between Dany and Sansa. And there is also the possibility that Jon and Dany might grow distant. Now that Dany knows Jon’s true parentage, she might not be too fond of him.

And there might also be a situation where Jon is torn between two of his houses. The Starks raised him but he is actually a Targaryen. So, where will his loyalties lie?

Fan theories about the upcoming battle

There have been many fan theories going around which might clear up the cloud around Game of Thrones season 8 episode 4. Many Redditors have paid super close attention to the trailer and chalked out some of the stuff.

Some of the GOT fans believe that Daenerys’ overconfidence and cocky nature is going to be her doom. In one of the lines, Cersei employs something called ‘root and stem’. It is interesting to note that this is the same thing that Arya Stark used when she slit Walder Frey’s throat. The trailer shows that both of Daenerys’ dragons are alive. But, Redditors believe that one more dragon is going to bite the dust in Game of Thrones season 8 episode 4. So, which one will it be? Drogon or Rhaegal?

Plus, Jaime’s loyalties are going to be tested too. He has been fighting with the Northeners till now. But, if the time calls for it, will he come to his sister/lover’s aid? And will the Valonqar prophecy be fulfilled?

On the other hand, Reddit user ‘the-giant’ explains the ending that the fans should expect. The user pointed out that team Jon-Dany is going to prevail over Cersei. But, the ultimate battle is going to happen between the people we actually care about. The user has predicted that Daenerys is going to remove anyone who is not going to bend the knee to her. And that includes Jon and Sansa too.

The user has also predicted that the final battle will be between Jon Snow and Daenerys Targaryen. And that is why the Night King had to be killed. The end would not have comprised of a zombie attack. And it won’t be Cersei’s evil plans either. It will be a heartbreaking battle between the characters and the people that we actually like.