Todd Gurley has become a risky name for the fantasy football owners ever since he was injured after the 2019 Super Bowl. While the Los Angeles Rams lost to the New England Patriots earlier in the Super Bowl 53, Gurley got an arthritic component in his knee. Everyone thought his career was over but he made a comeback in the Week 1 game against the Carolina Panthers where Cam Newton was useless.

Is Todd Gurley in uniform today?

Despite the Rams winning the game and Gurley rushing for around 100 yards, he kind of disappointed everyone. Does it mean that he shouldn’t be in anyone’s fantasy rankings or one should wait for the Rams vs Saints Sunday night game?

Most of the fantasy football owners are angry on Todd Gurley as Malcolm Brown finished both the touchdowns against the Panthers. Even after that he rushed for 97 yards and proved that he still got it. The real test of Gurley will be against the New Orleans Saints in Week 2 of NFL 2019 season.

And you'll understandably hear about it all week.

Rams vs Saints is kind of a rematch for NFC championship but it will be totally different this time. The Saints are s tough opponent and the Rams will need Gurley to play more minutes. Gurley defeated the Saints last time and he has the moral confidence to do it again.

Apart from Brown stealing some passes from Gurley, he would be absolutely fine. The running back can easily rush for more than 90 yards while also catching 5 passes for 45 yards. There are some great players in the Rams and Saints but Gurley would be the one to top the fantasy charts.

Although the LA Rams want to limit Todd Gurley’s playing time, they need him for the win. Rams vs Panthers Week 1 game should not be used to judge Gurley and he will show a lot of improvement as the NFL regular season progresses. 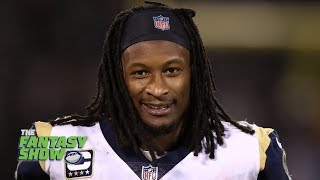