Cam Newton is facing a lot of criticism recently as he disappointed the Carolina Panthers in the first two games of this NFL season. The franchise quarterback couldn’t even manage a single touchdown and fumbled just 2 yards away from the finishing line. The Panthers lost against Los Angeles Rams in the Week 1 game and recently lost to Tampa Bay Buccaneers in Week 2 Thursday night football.

The worst part is that the Panthers themselves are not trusting Newton anymore and let Christian McCaffrey take the lead near the end line. Cam Newton turned 30 in May and has suffered a lot of various injuries which might have affected his performance. The Panthers are currently 0-2 in NFL 2019 season and they are blaming Newton for losing both the games.

Injuries have Impacted his Performance

Cam Newton is no longer in his MVP year shape, to be honest, he’s forgotten how to play elite-level football. Newton has gone through two shoulder surgeries and ankle surgery in the last few years. He has a lot of broken bones in the back, various head injuries, along with many ribs also broken throughout the years.

The star quarterback just suffered from a foot sprain 3 weeks ago and it has still not fully healed. The Panthers offensive can barely protect him and most of his dunks are not safe anymore. It is obvious Newton is not the same player anymore and he should accept the fact and retire like Andrew Luck. But instead, he just keeps on saying he’ll work hard and get better, which is a good thing if somehow that was possible.

Panthers are 0-2 and Newton is Responsible

The Panthers won’t talk about Greg Olsen or Curtis Samuel for their loses in season openers games. Carolina lost two continuous matches and Cam Newton have zero touchdowns that’s the thing everyone is talking. Even the Panthers management is not supported Newton and has shifted the blame of incompetence of other players on Newton.

No lie. If Cam Newton wasn't on the Panthers, I would fw him. But he plays for the Panthers so fuck 'em.

Its not about Cam winning a superbowl like Tiger Woods wins a jacket or Serena Williams wins a 🏆. It's about a team of 53 Panthers. If its about 1 man, why didnt Smitty win a ring? 🤷🏾‍♂️

THIS JUST IN: Cam Newton will forego his NFL career to play Cinna in a Hunger Games prequel. pic.twitter.com/kQRzCPgueP

Maybe his recent weird look was a means to divert attention from his quarterback performance to his appearance. Carolina Panthers will face Arizona Cardinals in the Week game and Newton has to perform. Otherwise, the Panthers would most probably replace him rather than losing more matches. 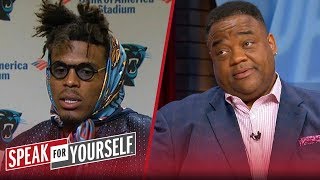