Philadelphia Eagles and Washington Redskins faced each other on Sunday night NFL games for the title of NFC East division. While the Eagles were 10 point favorites with the biggest point spread, the game ended blowing up all expectations. Everyone thought that the Redskins would lose easily but they gave a tough fight to the Eagles.

Washington could have won if Trent Williams was there in the team but somehow Carson Wentz saved the day for Philadelphia. Case Keenum proved that the Redskins are not weakest team in their division where they were leading with 20-14 till halftime. Wentz and Deshaun Jackson changed everything at the end and the Eagles magically won with 32-27.

Washington Redskins were leading by 20 points when half time was over. But after that, they couldn’t score a single point where the Philadelphia Eagles led the score to 32-20. The Redskins side just let the ball to pass along by Wentz and company while their offensive side was just wasting throws.

Eagles fans watching their team get spanked by Case Keenum and the Redskins: pic.twitter.com/b0dqXIKxnn

They needed an offensive tackle at that moment who could have never let the Eagles run away to the other side. Trent Williams was missed badly and could have changed the fate of the game in the favor of Redskins. But the trade talks between Williams and Redskins are still not resolved and it led to their team losing the game.

Carson Wentz saved the day for the Philadelphia Eagles like a superhero in the second half of the game. Wentz showed the world why he was named as the MVP of 2017 finals where the Eagles won the Super Bowl title. It was touchdown after touchdown, and even other member got the energy by seeing Wentz scoring.

Carson Wentz, ladies and gents. This is the 2017 version. #Eagles

The @Eagles pass rush was too much for Case Keenum and the Redskins.

Eagles defense woke up in a big way.

Deshaun Jackson also did s a great job as the supportive player and scored 15 points in just two drives. The defending side of Eagles should also be given the proper credit as the stopped the Redskins in the final quarter and changed the game in favor of their team. 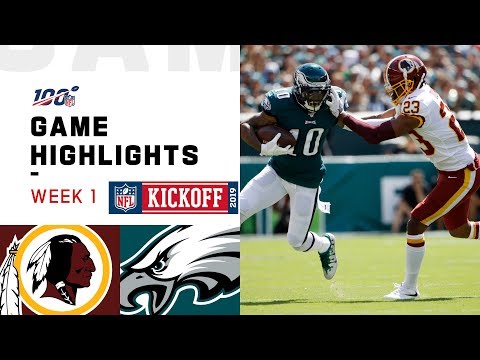