Philadelphia Eagles are one of the most favorite NFL teams who will start the 2019 season with hosting a game against the Washington Redskins. Both the teams will meet on Sunday afternoon and there are high chances that the clash ends up in a one-sided match. The Eagle has an average of 9.5 points per game in their home and can easily total up to a score of 46.

While the Redskins are so weak that they will probably get to pick the top picks in 2020 NFL draft. Philadelphia team is too solid and are among the top contenders for Super Bowl 2020. Carson Wentz and Trent Williams will have a big impact on Eagles vs. Redskins game and here are the betting odds predictions for the same.

Philadelphia Eagles and Washington Redskins might be two teams who are on the opposite sides of the performance spectrum but they both rely largely on their star players. The Redskins have the worst roster possible with Case Keenum as their below-average quarterback.

Trent Williams is the only good name in Washington who is currently sitting on a holdout and will probably miss the whole NFL 2019 season. The Eagles are looking at Super Bowl title with Carson Wentz leading them into league matches. Wentz is fit right now and will play in the opening games but the same can’t be said as the season reaches its 17th week.

Read more:  Triple H reunited with HBK to take on the Brothers of Destruction

Carson Wentz has a very good track record against the Redskins and will shatter their weak defensive force easily. In the three games of Eagles vs. Redskins, Wentz has thrown for 881 yards and eight touchdown passes.

Redskins Week 1 depth chart is out ahead of Eagles game. Ereck Flowers at left guard. Jordan Reed at tight end. Terry McLaurin at one WR spot. Derrius Guice at RB.

And how about this: With Washington playing at Philadelphia on Sunday, the Redskins claimed former Eagles' RB Wendell Smallwood on waivers, per source.

1-5: Eagles record vs Redskins when DJax was in Washington

The Eagles have the strongest wide receiving corps, a deep backfield and best offensive line to light up the scoreboard on Sunday match. Eagles vs. Redskins spread over 4-1 with the former winning with more than 10 points every time. 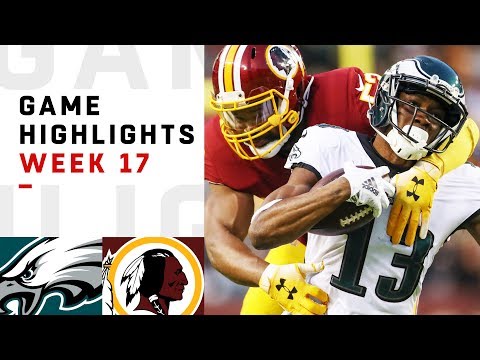