Doctor Strange 2 has hired Sam Raimi as the new director after the original director Scott Derrickson left the movie last month due to creative differences. But Marvel didn’t postpone the Doctor Strange sequel as they had already anticipated the fallout and shortlisted a few names in advance. Sam Raimi is now in the final stages of talks to direct Doctor Strange and the Multiverse of Madness.

BREAKING: Sam Raimi has OFFICIALLY been hired to direct ‘Doctor Strange in the Multiverse of Madness’ for Marvel Studios.

Raimi is one of the greatest directors of all time, known for his work on the original Spider-Man trilogy & the Evil Dead franchise. THIS IS AMAZING. WOW! pic.twitter.com/2gKwkd7UkU

Fans are very excited as Raimi is joining the MCU who previously started the superhero movie genre with its Spider-Man trilogy starring Toby Maguire. Derrickson will still be attached to Doctor Strange 2 as the executive producer and Sam Raimi will handle the direction as filming starts this May.

Sam Raimi to be the Director of Doctor Strange 2

Sam Raimi who become a household name after making the Spider-Man in the early 2000s, kind of disappeared from Hollywood. Raimi’s projects after Spider-man 3 include “Drag Me to Hell” in 2009 and “The Wizard of Oz” prequel “Oz the Great and Powerful” for Disney. But he has been busy serving as the producer and starting various horror franchises such as “Evil Dead” and “Poltergeist” which have also garnered several critical acclaims.

Marvel has a history of hiring talented filmmakers who have less experience and it turned out great with examples such as Russo Brothers and Taika Watiti. Ever since Scott Derrickson dropped out, everyone was speculating Sam Raimi to replace him since he also has a touch for horror and finally the Raimi will direct Doctor Strange 2.

Spider-Man and Doctor Strange have a previous connection as in the second movie there is a dialogue which was kind of easter egg till now and will be coming to full circle in the future. When J. Jonah Jameson is discussing names for Doc Ock, one of his employees suggests Doctor Strange, but JJJ replies “That’s pretty good, but it’s taken.”

Sam Raimi was all aboard the Doctor Strange train when he was still making Spider-Man movies. pic.twitter.com/OkSWgu8Xhm

While it seems just a namedrop at that time, Sam Raimi directing Doctor Strange 2 is now an amazing co-incidence. Doctor Strange in the Multiverse of Madness will release on May 7, 2021, and stars Benedict Cumberbatch and Elizabeth Olsen in the main roles. 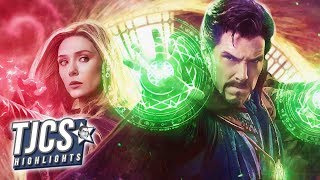