Doctor Strange 2 director Scott Derrickson has stepped out from the movie due to creative differences, which has lead to speculations that its release date can be delayed or postponed. While Derrickson said that the decision was mutual and he will still work as an Executive Producer for ‘Doctor Strange in the Multiverse of Madness’ which is the official name of the sequel.

Marvel and I have mutually agreed to part ways on Doctor Strange: In the Multiverse of Madness due to creative differences. I am thankful for our collaboration and will remain on as EP.

Even though MCU fans are shocked about the news, Scott Derrickson’s previous tweets kind of hinted on the same. But the sad news is Doctor Strange sequel movie starring Benedict Cumberbatch and Elizabeth Olsen could be now delayed and won’t have May 5, 2021, as the release date.

Doctor Strange in the Multiverse of Madness Release Date Postponed

Disney is currently looking to hire a new director and it won’t be an easy thing given Doctor Strange 2 was just about to start filming. Even though there are a few names sorted where WandaVision Matt Shakman is leading the race, the control of transfer from Scott Derrickson to anyone new won’t be easy.

Guardians of the Galaxy 3 has been delayed for 2-3 years after Disney removed James Gunn from the project and rehired later. Some rumors are claiming that Scott Derrickson was working behind the deadlines and Disney asked him to hurry but the director didn’t want to compromise on his art and backed out of the project.

Scott Derrickson quitting Doctor Strange 2 over creative differences sounds a bit suspicious as the director is known for making horror movies. As per some insider reports, Scott wanted to add more of the horror elements in the Dr. Strange sequel while Disney told him to make kid-friendly.

Also, it is rumored that the director didn’t like Wanda’s character inserted in the movie and the changes required due to WandaVision Disney+ show. No matter whatever is the reason, Doctor Strange 2: Multiverse of Madness is definitely going to release on a delayed schedule. 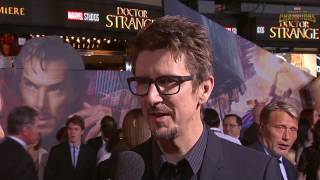