Conor McGregor vs Khabib Nurmagomedov II is a rematch that everyone wants (other than Khabib and his team). Fans of both the men have been demanding this rematch ever since UFC 229 and over a year later – it seems that this is finally going to happen!

While there are heavy speculations that Khabib vs Tony Ferguson might be the next fight for the Russian, there are rumors that Tony might have blown up one of his knees again leading to the fight between them getting canceled. If this happens, Dana White is likely to introduce a replacement – Conor McGregor!

The #UFC is talking about kicking the #Khabib vs Tony can down the road again, in favor of #ConorMcGregor rematch. They must know that if Khabib beats Tony there will be nobody left in the division to threaten him. Won't be able to sell a fight afterwards. Well, maybe #gaethje ..

Conor McGregor vs Khabib Nurmagomedov II – Who Will Win?

If the Khabib vs McGregor rematch indeed happens, there’s a good chance that Khabib will win this fight as well. Hence, Conor would likely try to avoid a comeback match against Khabib so that he can get at least a few wins before he gets humbled again!

The problem with Khabib is that while Khabib Nurmagomedov has a very similar style of fighting in each match, no one has ever managed to figure out how to break out of it. McGregor vs Khabib II would be interesting as no one knows Khabib as well as McGregor does!

@TheNotoriousMMA vs @TeamKhabib #MoscowRematch what do u say.

Tony Ferguson to Pull out of Khabib vs Tony?

Tony Ferguson vs Khabib Nurmagomedov is the original match, in case THIS doesn’t happen, it is only then that Conor McGregor might be considered as a replacement for Tony. Even for that Khabib has to agree. In any case, it will be interesting to see how this pans out. For more latest UFC news and updates, stay tuned with us! 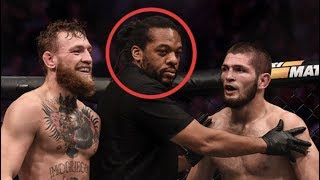