6 days ahead of Brexit, the British have taken to streets for the Brexit March. All to protest the UK’s departure from the EU. Hundreds of thousands are expected to walk to the Parliament. Today they arrive to participate in the ‘Put It To The People’ march.

October 2018 saw the rise of 700,000 people who marched into Central London. For the cause the numbers are expected to reach 1 million today.

Brexit March: ‘Put It To The People’ Details and Road Routes

The march will begin at 1 pm today, north of the Hilton Hotel in Park Lane. Continuing along Piccadilly, St James Street and Pall Mall, protestors will reach Trafalgar Square. From there, the rally will walk past Whitehall, along Downing Street to reach Parliament Square.

At 2 pm, keynote speakers will address the people, advising a fresh referendum for Brexit. The speeches are expected to last an hour.

Protestors are advised to take into account road closures in the area ahead of the march. Road works are being conducted on Pall Mall as well as on Stratton Street at Picadilly junction.

The campaign has a simple demand -” that ‘any Brexit is put to the people so that we can have the final say”.

The march comes after the EU extended Brexit to May 22. Granted Prime Minister Theresa May can get MPs to back her deal. Rejection of the deal may lead to an even longer extension, or a proposal for the UK to return to EU till April 12 with a new deal. 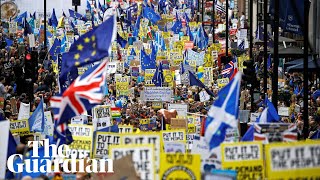