Better Call Saul Season 6 has been renewed and it will also be the final season of the Breaking Bad prequel spinoff show. The transformation of an innocent lawyer Jimmy McGill to the crooked conman Saul Goodman is the key plotline of the show which is finally coming to an end.

Another wild and unpredictable season coming for you! 2.23 #BetterCallSaul pic.twitter.com/oQIZYNcSJY

Every prequel show ends with reaching the starting moments from where it started and it means season finale of Better Call Saul could have Saul Goodman meeting with Walter White and Jesse Pinkman from the Breaking Bad days. Bryan Cranston and Aaron Paul could have a cameo as Jesse and Mr. White in Better Call Saul season 6 finale episode.

Better Call Saul was always meant to end at some point and AMC never thought that the prequel will be so much successful after the standards that Breaking Bad set in the TV history. Vince Gilligan and Peter Gould as the brilliant creators of the show took it to the next level and it is one of the most awarded shows of AMC right now.

Better Call Saul season six will be the last and final season of the show and will premiere in 2021 with a total of 13 episodes. It makes sense for the makers to go out with a bang and brought in the trio of Saul Goodman, Walter White and Jesse Pinkman once again back on the same screen.

Better Call Saul is already getting closer and closer to the Breaking Bad timeline and involving several characters from the show. Dean Norris’ Hank Schrader and Steven Michael Quezada as DEA agent, Steven Gomez from the original show are returning in the fifth season of Better Call Saul.

.@BetterCallSaul Season 5 is about to welcome some friendly faces. @DeanJNorris and @StevenMQuezada will be reprising their @BreakingBad characters, DEA Agents Hank Schrader and Steven Gomez. #TCA20 pic.twitter.com/AIRTIrXDaJ

While Walter White and Jesse Pinkman are not coming up for this season, there are hopes to get them before the show ends. Bryan Cranston and Aaron Paul became popular with this show and fans are waiting for a reunion but El Camino movie didn’t deliver that. Better Call Saul season 6 will finally have the cameos of Jesse and Walter White, ending the show giving closure to everyone. 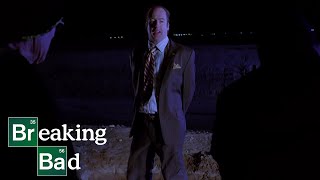