Arrow Season 7 Episode 14 is going to be the latest episode from Arrow on The CW network. Titled ‘Brothers and Sisters’, there’s still some time for the episode to release. However, a promo of the latest Arrow episode is now out. This gets us all hyped up about what’s going to happen in the next episode of Arrow.

Let us take a closer look at this promo that just came out – as well as what to expect from Arrow Season 7 Episode 14.

The official promo of this new episode of Arrow has been released by the CW Network. The promo gives us an action-packed insight into what to expect from Arrow once the show returns on the 4th of March. You can see the promo here: 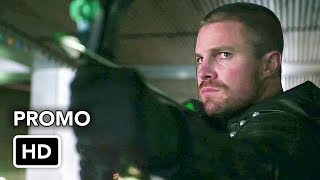 Arrow Season 7 Episode 14 ‘Brothers and Sisters’ can be watched on TV on the CW network. However, those who prefer to watch online need not worry. The latest episode of Arrow can be watched online on the CW app. Moreover, the best part about this app is that it is completely free to watch and download.

The CW network application is available for Android as well as iOS. Not only can you watch Arrow Season 7 episodes over there – but also many other shows from the CW Network!