The iPad mini 5 or the 2019 iPad Mini doesn’t look much different from the previous model. The addition of iPhone XS’ A12 CPU has made some difference from the inside. But apart from that, there are no such differences between the two. Apple has done barely anything about the internal changes.

iFixit folks decided to tear it down in order to find out what’s new. After the experiment, they came to certain conclusions. The new iPad Mini hasn’t changed much from the outside and is almost identical to the previous model. From the inside also, the iPad Mini 5 is an updated version of the previous iPad Mini and not the new iPad Air’s smaller version.

This implies that it has the same battery as the old version. There is an addition of new ambient light sensors and a new True Tone display. Along with that, there is an updated 7-megapixel front-facing camera. Other smaller additions include the addition of 3GB of RAM and Bluetooth 5 support.

The new Apple iPad Mini offers a lack of reparability and the amount of adhesive makes it unnecessarily difficult. It just gets really bad and messy.

After a number of conflicting experiences ultimately leading up to this Mini’s glued-in battery, we’re officially not optimistic anymore about seeing adhesive pull tabs for iPad batteries. 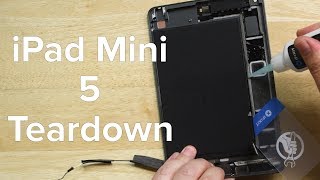 Keeping the flaws aside, the new iPad 5 Mini is great for all those who find the small 7.9-inch display comfortable to use as compared to the other larger options. You can access the new iPad Mini 5 at any of the Apple stores and its retail partners.