Xbox Live Gold offer is giving out the best game for absolutely free and the titles for February 2020 lineup are already revealed. Every user can download four games for totally free on the Xbox Live Games with Gold membership for the next month of this year. To get the free games, all you need to do is get the Xbox Live Gold membership of Xbox Game Pass at just $14.99 per month and you can save a lot of money.

The other benefits for Xbox Gold membership include multiplayer server access, free and discounted games in Microsoft Store and more. Star Wars Battlefront, Fable Heroes, Call of Cthulhu and TT Isle of Man are the games that you can get for free with Xbox Live Gold in February 2020 offer.

Star Wars: Battlefront will be totally free from February 16 to February 29 for Xbox Live Gold members. The intense action game features the events from the first six Star Wars movies and features your favorite characters including Darth Vader and Master Yoda. One could choose from so many missions, where you can defeat the Empire or crush the rising Rebellion.

Fable Heroes will be totally free from February 1 to February 15 for Xbox Live Gold members. Lionhead Studios is the game developers for this amazing fantasy violence game. Fable Heroes allows players to choose from 12 heroes from the ‘Fable Series’  and dive into amazing action.

Call of Cthulhu will be totally free from February 16 to March 15 for Xbox Live Gold members. The thriller adventure game is set in 1924 where a group of private investigators is trying to find the mystery behind the tragic death of the Hawkins family on the isolated Darkwater Island. Cyanide studios are the main developers for this detective game.

TT Isle of Man will be totally free from February 1 to February 29 for Xbox Live Gold members. The motorcycle racing game developed by Kylotonn is the closest you can get in terms of actual experience. TT Isle of Man works on Playstation 4, Xbox One, Microsoft, and Nintendo Switch platforms. 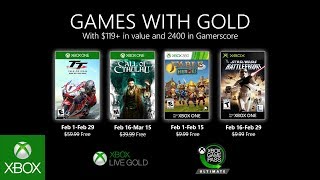