Xbox free Games with Gold for March 2020 has been revealed and there are amazing titles that gamers can play. There are a total of 4 games available for free where two of them are only for Xbox One, the other two can be played on even Xbox 360.

Microsoft has made sure that users with Xbox Gold Live membership always gets the best benefits. Batman: The Enemy Within, Shantae: Half-Genie Hero, Castlevania: Lords of Shadow 2, and Sonic Generations will be totally free in March 2020 as a part of Xbox Games with Gold membership benefits.

Batman: The Enemy Within (Episode 1-5) with the complete season will be available for free on Xbox One consoles from March 1 to March 31. The latest Telltale episodic point-and-click graphic adventure video game has been released through August 8, 2017 (episode 1) and March 27, 2018 (episode 5). The game offers players to play as both Batman and Bruce Wayne where they fight criminals, use deception, make alliances and prepare for the final battle against the Riddler.

Too many games, not enough months.

Shantae: Half-Genie Hero is a platform video game developed and published by WayForward Technologies and will be available for free on Xbox One console gamers from March 16 to April 15. The game was originally released on June 8, 2017, where gamers can play as Shantae and solve the crime spree sweeping Sequin Land. The gameplay offers Hari-Whip Attack or transforms into a fearsome creature to fight against the monsters and masterminds.

Castlevania: Lords of Shadow 2 is an action-adventure game developed by MercurySteam and published by Konami which was originally released in 2014. The Dracula based game will be available on both Xbox 360 and Xbox One from March 1 to March 15. Dracula / Gabriel Belmont is the main character in the open-world adventure, where he regains his powers to battle against his old enemy Satan.

Sonic Generations is a platform game developed by Sonic Team and Dimps, published by Sega and was released way back on November 1, 2011. The speedster hedgehog game will be available on both Xbox 360 and Xbox One from March 16 to March 31. Sonic is thrown back in time in this new adventure where he interacts with the younger versions of his friends and other characters, and even himself and the goal is to discover the mastermind and get back in the present time. 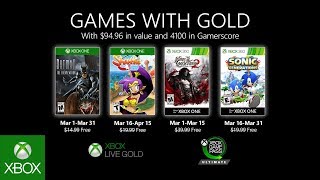