WWE NXT is all set to make its TV Debut and every show needs major names – while NXT is all about fresh new talent, or indie names which are new to WWE, the company is also likely to move some of their main-roster talent to NXT. Here are some names who are expected to join the Yellow Brand.

Since .@WWENXT is gonna be on USA, why don't they just bring back those main roster folks back, who are just getting buried? @WWE #NXT

Despite his main-roster run in the company being purely that of a jobber who does nothing except smile and loses a lot, Bo Dallas was actually a crazy good wrestler in his NXT days. He was once the longest-reigning NXT Champion too. His return to the yellow brand is bound to help him do well!

EC3 was one of the biggest names from Impact/TNA to jump ship to WWE but he hasn’t done anything since moving to the company. His main roster run has been very disappointing and perhaps the worst treatment by WWE to a talent of his caliber! If he gets called back to NXT, he’s likely to do well there.

Am I the only one who thinks @WWENXT should have #RoyalRumble and #MoneyInTheBank matches at the same time as the main roster? Even more so now that they're going live every week. @WWE #WWE #NXT #WeAreNXT

The Samoan one hasn’t been given any top-level runs in WWE. He makes everyone look good and cuts some really good promos. However, his return to the yellow brand will provide NXT with the much needed monster-heel persona that USA Network would totally admire!

Vince’s infamous brass-ring comment has cemented the fact that Cesaro would never make it to the top of the table in WWE’s Raw/SmackDown brands. However, he could go back to NXT where he is bound to have some really good matches with the best of indie names!

Former NXT Champ Kevin Owens was being built as the next Stone Cold Steve Austin but all of that fell through as they suddenly had him apologize to Shane ‘O Mac and even lose in the first round of King of the Ring tournament. His return to NXT could see him becoming the top face of the brand. 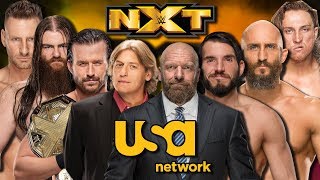